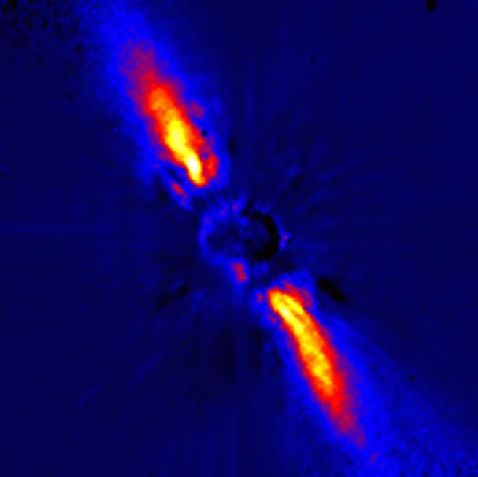 Explanation: In the early 1980s, Beta Pictoris became one of the most important stars in the sky. Satellite and ground-based telescopic observations revealed the presence of a surrounding outer disk of material and an inner "clear" zone about the size of our solar system - strong evidence for the formation of planets. Beta Pictoris is 50 light years away and any orbiting planets are too small and faint to image at that distance. But evidence continues to mount that this star indeed has comet-like bodies in the disk and a Jupiter-sized planet orbiting within the central zone. Shown here in false color, this recent, highly detailed picture was obtained at the European Southern Observatory by blocking the overwhelming direct starlight and imaging the near-infrared light from the disk. The disk's warped bright inner region is indirect evidence for an orbiting planet.