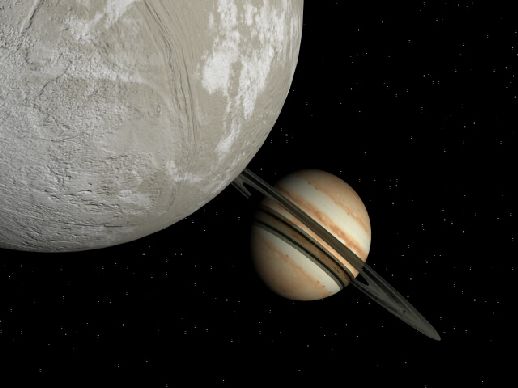 Explanation: In the last few years, observational astronomy has given humanity evidence of the existence of worlds beyond the solar system. Solar-type stars are now inferred to harbor planets of approximately Jupiter mass - some residing in temperature zones which could conceivably support liquid water and therefore life! Above is a hypothetical scene near one such planet whose sun, 47 Ursae Majoris (47 UMa), is very similar to our own. In our sky, 47 UMa appears as a faint, inconspicuous star below the cup of the "the Big Dipper". (Our own sun would be equally inconspicuous when viewed from 47 UMa ...) Astronomers G. Marcy and P. Butler announced the discovery of a planet associated with this star in 1996 and reported it to have a mass of about 2.4 Jupiters or more with an orbital period of 3 years. This artist's extrasolar vision pictures the detected planet, 47 UMa b, as a gas giant surrounded by a ring of material - analogous to our own gas giant Saturn. In the foreground lies a hypothetical moon of 47 UMa b. Could such a moon support life? 47 UMa is only 44 light years distant, fairly close by astronomical standards - yet there is evidence for planetary systems which are closer still. NASA plans to explore nearby planetary systems using spaceborne observatories.