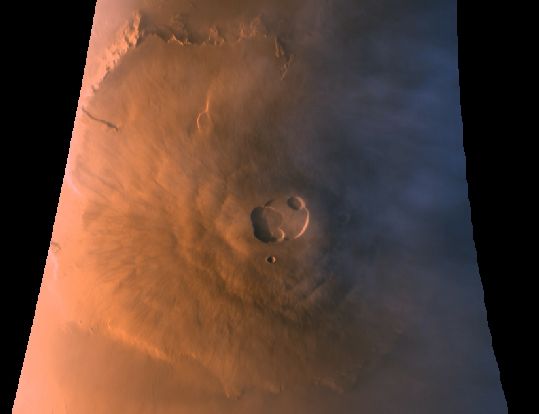 Explanation: This Halloween, the news about Mars is good news - Mars Global Surveyor will resume aerobraking into a mapping orbit around the haunting red planet. Wide angle cameras onboard the spacecraft recently recorded this shadowy image of Olympus Mons, the Solar System's largest volcano, from an altitude of over 100 miles. The summit depression or caldera of Olympus Mons is about 40 miles across and 15 miles above the Martian surface. On Halloween Night in 1938, Mars also made the news when Orson Welles' radio theatre adaptation of H.G. Wells' "War of the Worlds" - a fictional account of invaders from Mars - was dramatized as a live news report. The performance was so convincing it tricked some listeners, but most who heard the broadcast felt it was a treat. Have a happy and safe Halloween!