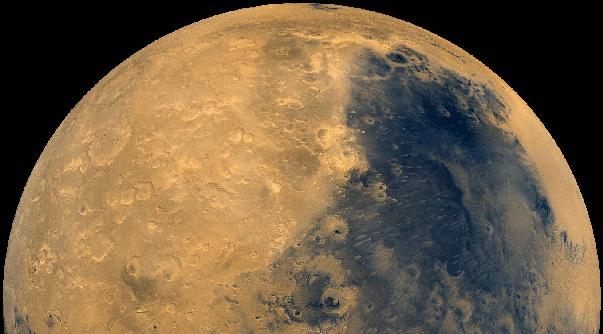 Explanation: For centuries, astronomers have observed Mars, patiently compiling many facts and theories. Like a distant mirror of Earth dwellers' hopes and fears for the future, Mars, the fourth planet from the sun, has inspired profound works of fiction as well. Classics of the science fiction genre with visions of Earth's alluring planetary neighbor include H.G. Wells' terrifying "War of the Worlds", Edgar Rice Buroughs' John Carter adventure series (Thuvia, Maid of Mars, The Gods of Mars, A Princess of Mars, The Warlord of Mars), Robert Heinlein's youthful "Podkayne of Mars", and Ray Bradbury's reflective and philosophical "The Martian Chronicles". Through the years scientific theories about Mars have been disproven, but the sense of wonder and adventure embodied in these works of fiction remain with us. As two spacecraft from Earth now draw close to the red planet- in dreams, desires, and a quest for knowledge - we are once again bound for Mars.