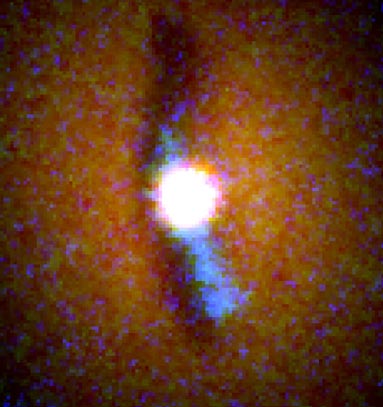 Explanation: Something is lighting up the center of galaxy NGC 6251. Leading speculation holds that it is a large black hole not shrouded by gas and dust typically found near the center of a galaxy. Observations taken with the Hubble Space Telescope and released earlier this week indicate a new perspective on the strange beasts that rule the centers of galaxies: a bright central object that is illuminating a surrounding material disk, shown in blue. The lack of reflection from the upper part of the disk indicates that this disk is warped in shape. Although not visible in the above composite image, a huge plasma jet streams out from the central object, perpendicular to the warped disk.