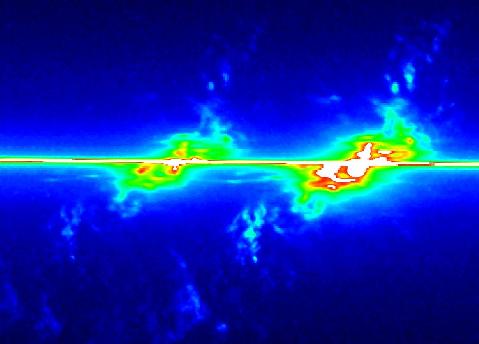 Explanation: Glowing gas clouds are streaming from the core of galaxy NGC4151 at hundreds of thousands of miles per hour. A powerful tool, the Hubble Space Telescope's new STIS instrument, makes it possible to map out the cloud velocities - producing this false color "velocity map" for the central regions of NGC4151. The horizontal line is light from the intensely bright region near the galaxy nucleus. Emission at two wavelengths characteristic of Oxygen atoms in the gas clouds is visible along this line. Below the line the emission is displaced to the left, indicating motion toward us (blue shift); above the displacement is to the right indicating a receding motion (red shift). Where do the clouds come from? As evidence mounts, the widely accepted explanation for energetic nuclear activity in galaxies is based on material spiraling into a central black hole with over a million times the mass of our sun. The rotating disk of interstellar debris which develops is thought to blast out high velocity jets along the axis of the disk. Do all galaxies contain supermassive black holes?