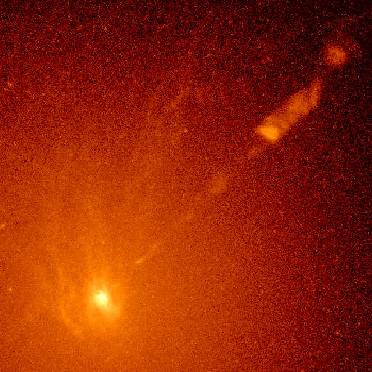 Explanation: The center of nearby giant galaxy M87 is a dense and violent place. In this 1994 photograph by the Hubble Space Telescope, a disk of hot gas was found to be orbiting at the center of this massive elliptical galaxy. The disk is evident at the lower left of the picture. The rotation speed of gas in this disk indicates the mass of the object the gas is orbiting, while the size of the disk indicates an approximate volume of the central object. These observations yield a central density so high that the only hypothesized object that could live there is a black hole. The picture also shows a highly energetic jet emanating from the central object like a cosmic blowtorch. The jet is composed of fast moving charged particles and has broken into knots as small as 10 light years across.