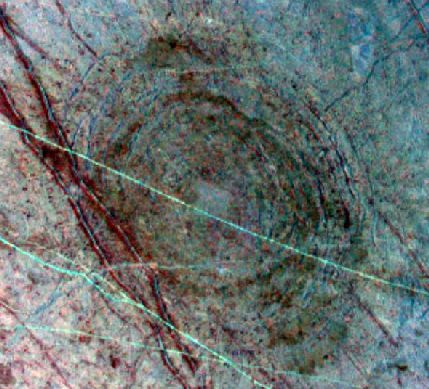 Explanation: This bull's-eye pattern marks the impact of a mountain-sized comet or asteroid on the icy surface of Jupiter's moon Europa. Recorded by the Galileo spacecraft in April of this year, the composite false color image clearly reveals the telltale concentric fractures which cover about 86 miles - roughly equivalent to the Island of Hawaii. The fat reddish and finer blue-green lines overlay the impact fractures and must therefore be younger surface features formed after the impact. The dark red color may be the result of a a relatively dirty water-ice mixture. The possibility of liquid water below the ice has fueled speculation that life may exist on this large and distant moon.