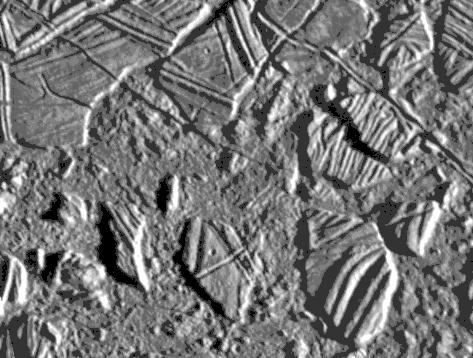 Explanation: The surface of Jupiter's moon Europa has shifted. Photographs released yesterday of Europa's surface taken by the spacecraft Galileo show that the smooth moon's icy surface is sometimes like a giant scrambled jigsaw puzzle. Pieces of Europa's surface, identifiable above, have rafted to new locations. Also visible are larger areas that are clearly shifted from their original alignment. What could cause this surface shuffle? One leading explanation is water - oceans of water just beneath Europa's ice plains. This discovery again fuels speculation that life might exist far from the comfort of Earth.