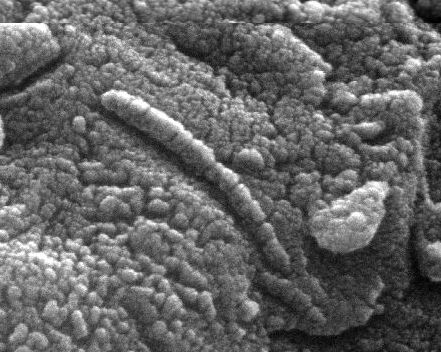 Explanation: Alien! Alien? Is this what an ancient Martian looked like? The tube-like form on the above highly magnified image is now believed by many to be a fossil of a simple Martian organism that lived over 3.6 billion years ago. If this extraordinary claim is true, this alien could hardly have been less intimidating as its fossil measures less than 1/100th the width of a human hair. A reconstruction of events indicates that the meteorite that housed this potential fossil was catapulted from Mars during a huge impact 16 million years ago and fell to Earth's Antarctica only 13,000 years ago. Evidence supporting this claim of early Martian life includes organic molecules and mineral features characteristic of biological activity found in the meteorite. NASA's current missions to Mars are Mars Global Surveyor and Mars Pathfinder. Though not designed to look for martian fossils, these missions may reveal information about conditions on early Mars which might have been more favorable for life.