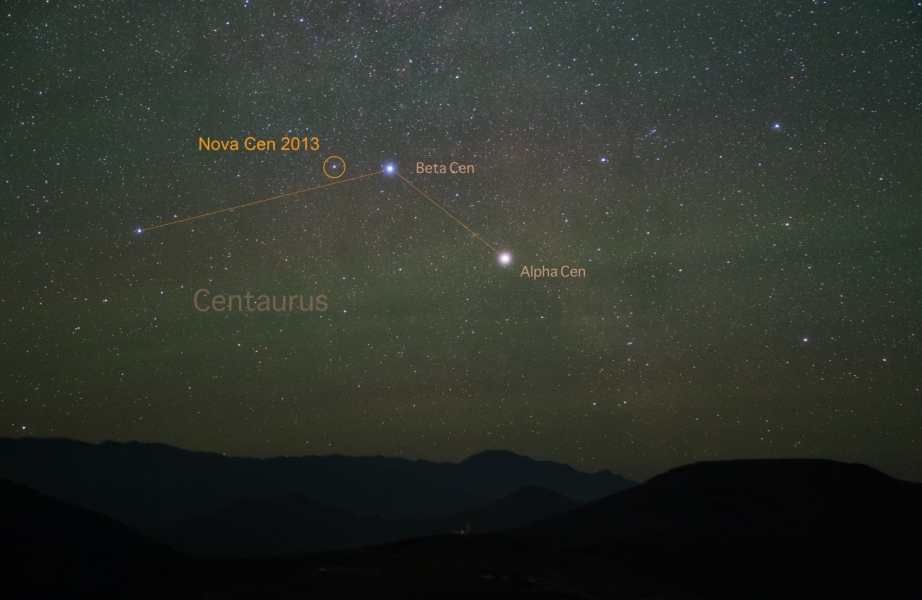 Explanation: Brightest stellar beacons of the constellation Centaurus, Alpha and Beta Centauri are easy to spot from the southern hemisphere. For now, so is new naked eye Nova Centauri 2013. In this night skyscape recorded near Las Campanas Observatory in the Chilean southern Atacama desert on December 5, the new star joins the old in the expansive constellation, seen at early morning hours through a greenish airglow. Caught by nova hunter John Seach from Australia on December 2 as it approached near naked eye brightness, Nova Cen 2013 has been spectroscopically identified as a classical nova, an interacting binary star system composed of a dense, hot white dwarf and cool, giant companion. Material from the companion star builds up as it falls onto the white dwarf's surface triggering a thermonuclear event. The cataclysmic blast results in a drastic increase in brightness and an expanding shell of debris. The stars are not destroyed, though. Classical novae are thought to recur when the flow of material onto the white dwarf eventually resumes and produces another outburst.