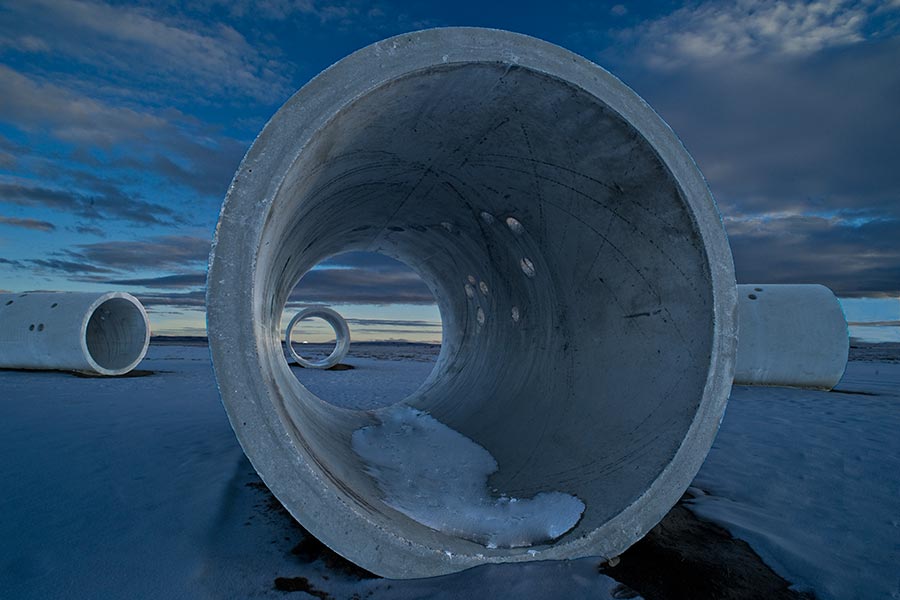 Explanation: Today the Sun stands still at 05:30 UT. Halting its steady march toward southern declinations and begining its annual journey north, the event is known as a solstice. In the northern hemisphere December's solstice marks the astronomical start of winter. And if you're in the Great Basin Desert outside of Lucin, Utah, USA, near solstice dates you can watch the Sun rise and set through Sun Tunnels. A monumental earthwork by artist Nancy Holt, the Sun Tunnels are constructed of four 9 foot diameter cast concrete pipes each 18 feet long. The tunnels are arranged in a wide X to achieve the solstitial sunset and sunrise alignments. In this dramatic snapshot through a Sun Tunnel the Sun is just on the horizon. The cold, cloudy sunset was near the 2010 winter solstice. During daylight hours, holes in the sides of the pipes project spots of sunlight on their interior walls, forming a map of the principal stars in the constellations Draco, Perseus, Columba, and Capricorn. Fans of planet earthworks and celestial landart should note that the Sun Tunnels are about 150 miles by car from Robert Smithson's (Holt's late husband) Spiral Jetty.