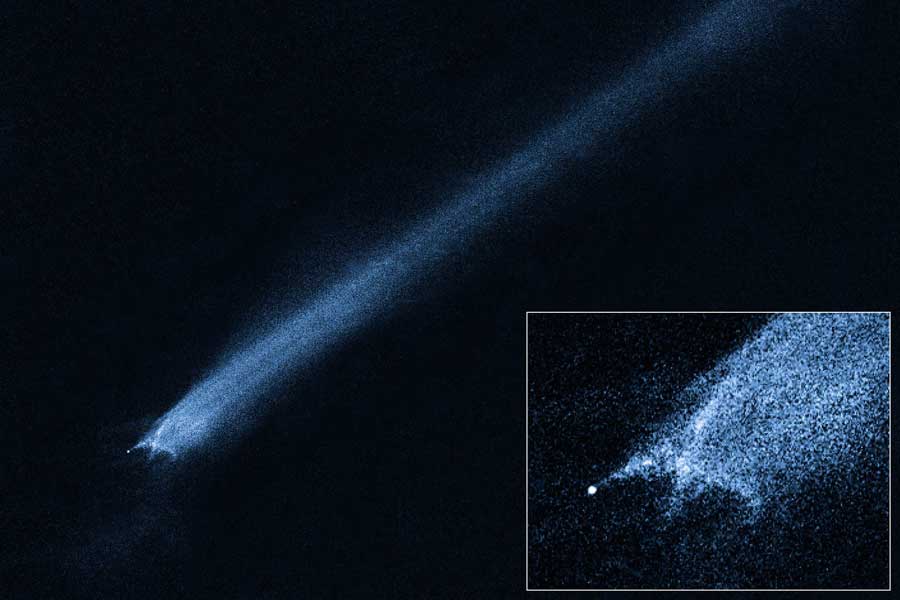 Explanation: What is this strange object? First discovered on ground based LINEAR images on January 6, the object appeared unusual enough to investigate further with the Hubble Space Telescope last week. Pictured above, what Hubble saw indicates that P/2010 A2 is unlike any object ever seen before. At first glance, the object appears to have the tail of a comet. Close inspection, however, shows a 140-meter nucleus offset from the tail center, very unusual structure near the nucleus, and no discernable gas in the tail. Knowing that the object orbits in the asteroid belt between Mars and Jupiter, a preliminary hypothesis that appears to explain all of the known clues is that P/2010 A2 is the debris left over from a recent collision between two small asteroids. If true, the collision likely occurred at over 15,000 kilometers per hour -- five times the speed of a rifle bullet -- and liberated energy in excess of a nuclear bomb. Pressure from sunlight would then spread out the debris into a trailing tail. Future study of P/2010 A2 may better indicate the nature of the progenitor collision and may help humanity better understand the early years of our Solar System, when many similar collisions occurred.