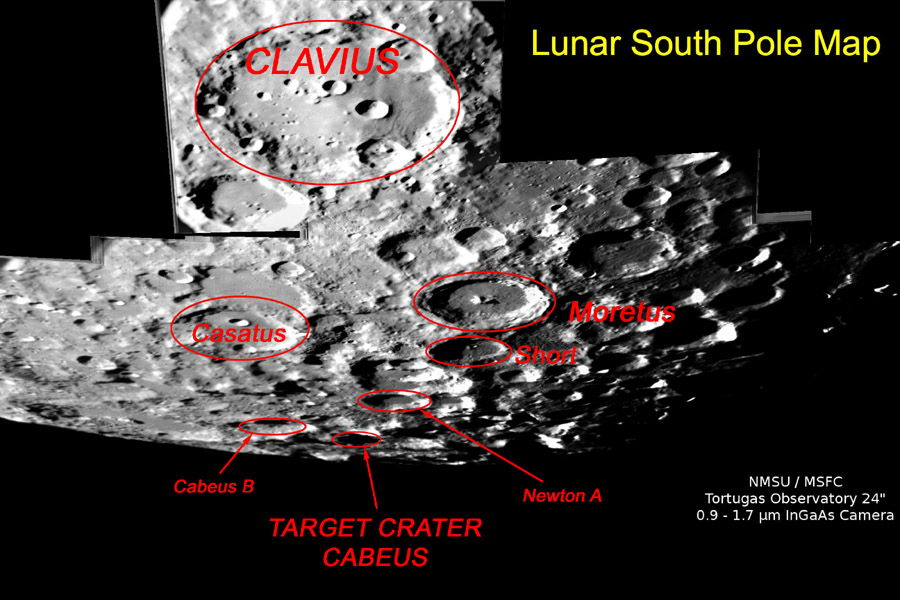 Explanation: About 100 kilometers from the Moon's South Pole, 100 kilometer wide crater Cabeus is the target for two LCROSS mission spacecraft on course to impact the Moon tomorrow. The shadowed crater is strongly foreshortened in this mosaic, a representative view of the region for earthbound telescopes. The impacts are intended to create billowing debris plumes extending into the sunlight above the crater walls, that could reveal signs of water. First to impact will be the mission's Centaur upper stage rocket at 11:30 UT (7:30am EDT). The instrumented LCROSS mothership will image the impact and then fly through the resulting debris plume analyzing the material blasted from the crater floor. Four minutes after the first impact, the LCROSS mothership itself will crash into Cabeus. The plumes are expected to be visible in telescopes about 10 inches in diameter or larger, with the timing favoring Moon watchers in western North America and the Pacific. NASA also plans to broadcast live footage from the LCROSS mission on NASA TV starting at 6:15am EDT / 3:15am PDT on October 9.