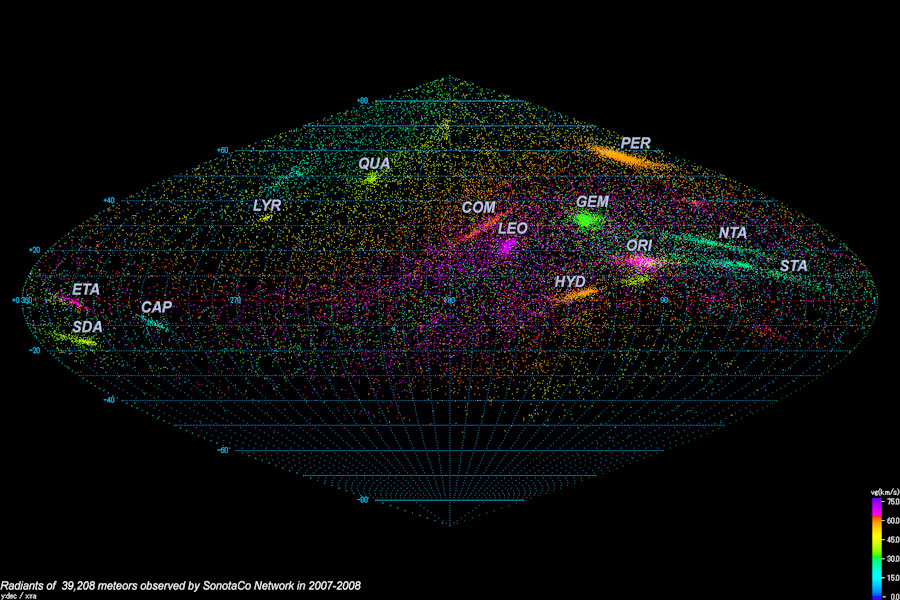 Explanation: Where do meteors come from? Visible meteors are typically sand-sized grains of ice and rock that once fragmented from comets. Many a meteor shower has been associated with a known comet, although some intriguing orphan showers do remain. Recently, a group of meteor enthusiasts created a network of over 100 video cameras placed at 25 well-separated locations across Japan. This unprecedented network recorded not only 240,000 optically bright meteors over two years, but almost 40,000 meteors seen by more than one station. These multiple-station events were particularly interesting because they enabled the observers to extrapolate meteor trajectories back into the Solar System. The resulting radiant map is shown above, with many well known meteor showers labelled by the first three letters of the home constellation. Besides known meteor showers, eleven new showers were identified by new radiants on the sky from which meteors appear to flow. The meteor sky is ever changing, and it may be possible that new shower radiants will appear in the future. Research like this could also potentially identify previously unknown comets or asteroids that might one day pass close to the Earth.