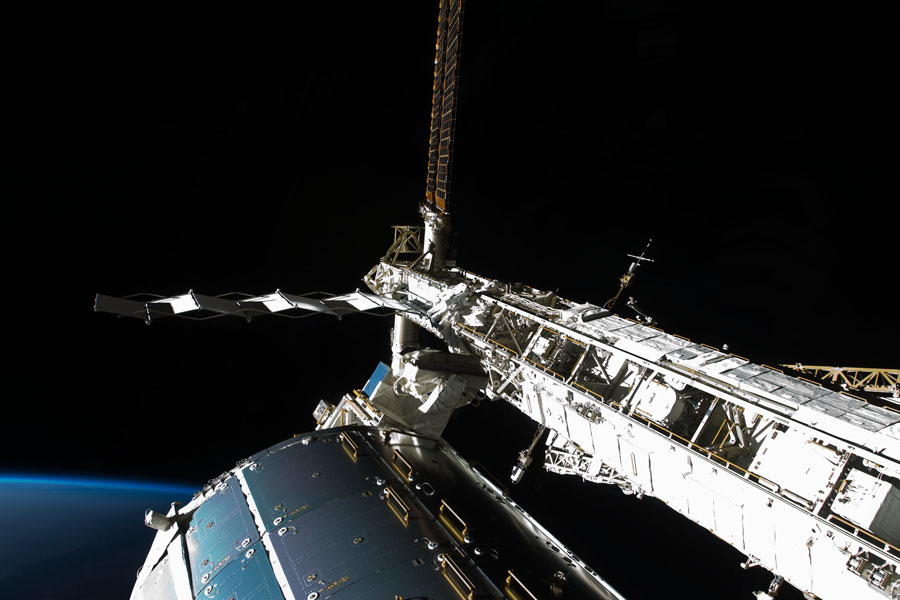 Explanation: Where's the astronaut? Somewhere in this impressive array of International Space Station (ISS) hardware, astronaut Steve Bowen can be found upgrading and cleaning key parts of Earth's most prominent orbital outpost. Astronaut Bowen and Heidemarie Stefanyshyn-Piper (not pictured), part of the Space Shuttle Endeavour's recently ended STS-126 mission to the ISS, spent nearly three hours on this spacewalk hovering high above planet Earth. Bowen progressed toward achieving a key goal of the mission -- servicing of the Solar Alpha Rotary Joints to better allow some solar arrays to track the Sun. In the lower foreground of the above image is the cylindrical Columbus Laboratory, protruding from the right is an impressively large space station truss, while in the background are some of the expansive solar arrays that collect sunlight to power the ISS. Far in the distance, a blue arc of Earth's thin atmosphere is visible on the horizon. The next space shuttle flight is scheduled for 2009 February, when Discovery will deliver elements to further expand the ISS.