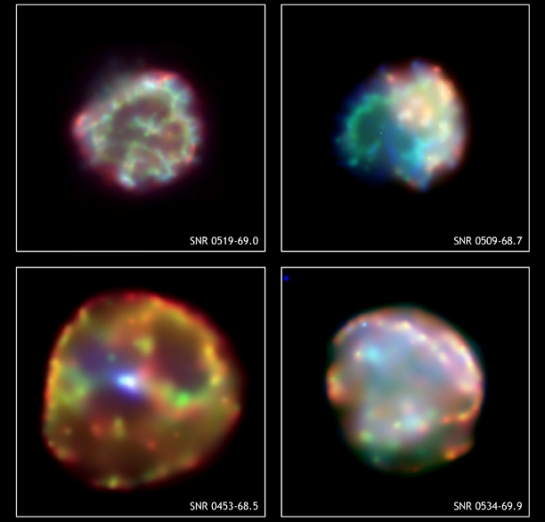 Explanation: These four panels show x-ray images of expanding cosmic debris clouds, tens of light-years across, in nearby galaxy the Large Magellanic Cloud. The supernova remnants (SNRs) are the results of two types of stellar explosions and are arranged in order of apparent age or the time since light from the initial explosion first reached planet Earth. Clockwise starting at the upper left are remnants aged 600 years, 1,500 years, 10,000 years and 13,000 years. The first three result from a Type Ia explosion - the destruction of a white dwarf star by a thermonuclear blast triggered by mass accreted from a stellar companion. The fourth (lower left) is a Type II explosion - triggered by the final collapse of the core of a massive star. A neutron star, the remnant of the collapsed core, lies at its center.