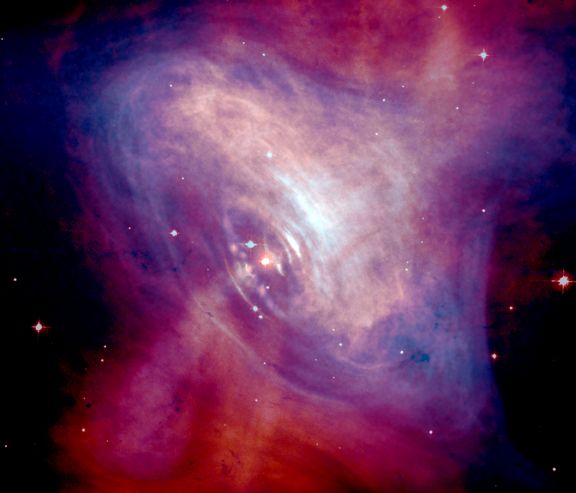 Explanation: The Crab Pulsar, a city-sized, magnetized neutron star spinning 30 times a second, lies at the center of this composite image of the inner region of the well-known Crab Nebula. The spectacular picture combines optical data (red) from the Hubble Space Telescope and x-ray images (blue) from the Chandra Observatory, also used in the popular Crab Pulsar movies. Like a cosmic dynamo the pulsar powers the x-ray and optical emission from the nebula, accelerating charged particles and producing the eerie, glowing x-ray jets. Ring-like structures are x-ray emitting regions where the high energy particles slam into the nebular material. The innermost ring is about a light-year across. With more mass than the Sun and the density of an atomic nucleus, the spinning pulsar is the collapsed core of a massive star that exploded, while the nebula is the expanding remnant of the star's outer layers. The supernova explosion was witnessed in the year 1054.