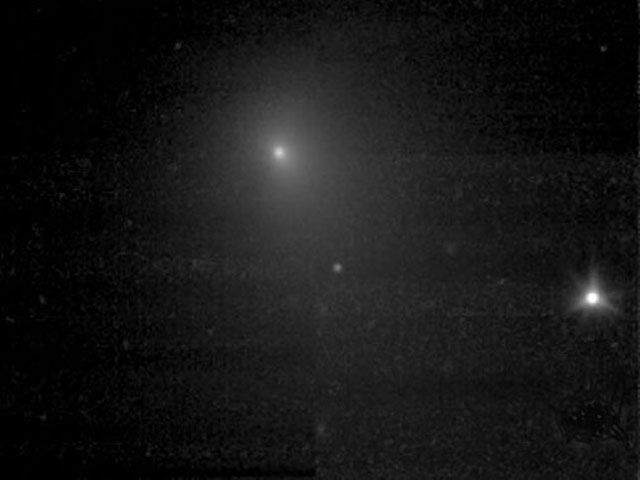 Explanation: The Deep Impact spacecraft continues to close on Comet Tempel 1, a comet roughly the size of Manhattan. Early on July 3 (EDT), the Deep Impact spacecraft will separate in to two individual robotic spaceships, one called Flyby and the other called Impactor. During the next 24 hours, both Flyby and Impactor will fire rockets and undergo complex maneuvers in preparation for Impactor's planned collision with Comet Tempel 1. On July 4 (1:52 am EDT) if everything goes as scheduled, the 370-kilogram Impactor will strike Tempel 1's surface at over 14,000 kilometers per hour. Impactor will attempt to photograph the oncoming comet right up to the time of collision, while Flyby photographs the result from nearby. The above image was taken on 19 June from about 13 million kilometers out and used to help identify the central nucleus of the comet inside the diffuse coma. Telescopes around the Earth, including the Hubble Space Telescope, will also be closely watching the distant silent space ballet. The result may give crucial information about the structure of comets and the early history of our Solar System.