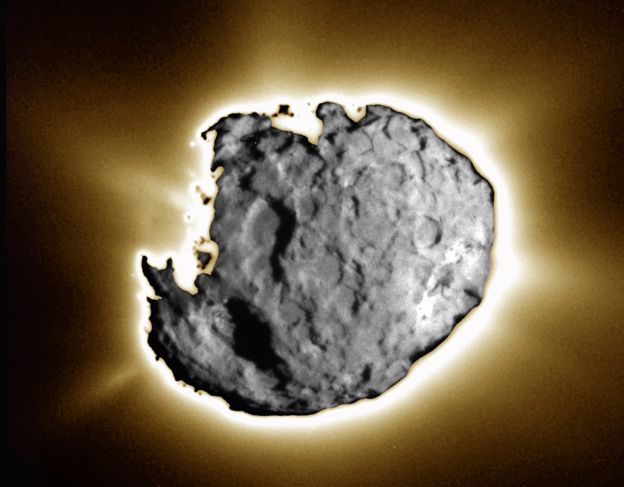 Explanation: Dynamic jets of gas and dust surround one of the most active planetary surfaces in the solar system in this wild-looking picture of a comet nucleus. The comet's designation is 81P/Wild 2 of course (sounds like "vilt 2"), and the picture is a composite of two images recorded by the Stardust spacecraft's navigation camera during its January 2nd flyby. The composited images consist of a short exposure recording startling surface details of Wild 2's nucleus and a longer exposure, taken 10 seconds later, revealing material streaming from the surface. The left edge of the nucleus appears extremely jagged due to a strong shadow. Pitted and eroded after billions of years of outgassing and meteorite impacts, the nucleus pictured is only about 5 kilometers in diameter, while the jets of dust and gas ultimately leave trails millions of kilometers long. Stardust is scheduled to return samples of Wild 2's cometary dust, picked up during the flyby, to Earth in January 2006.