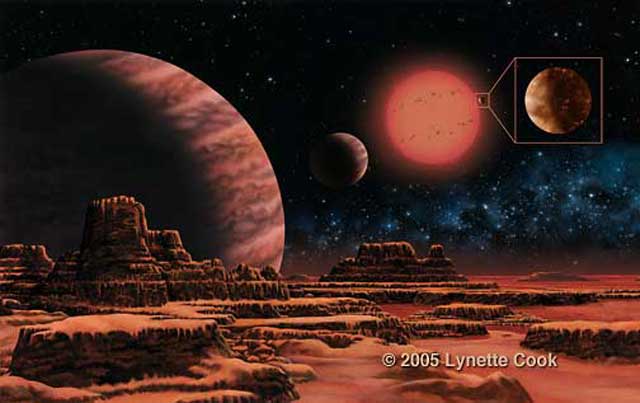 Explanation: Is our Earth unique? In continuing efforts to answer this question, astronomers have now discovered an Earth-like planet orbiting a distant normal star. Previously over 150 gas-giant planets like Jupiter had been so discovered. Slight, fast, but regular wobbles of nearby small M-dwarf star Gliese 876 showed evidence for a planet with a likely mass slightly higher than a minimum six times the mass of Earth. The planet's small mass indicates that it is likely terrestrial in nature, similar in composition to the inner planets of our Solar System. If indeed made predominantly of rock, the planet's surface gravity would not even be able to contain the gasses of a Jupiter-like planet. The newly discovered planet would not make a good vacation spot for humans, however, as it orbits so close that the surface temperature probably tops a searing 200 degrees Celsius. The system is illustrated in the above drawing as seen from a hypothetical moon orbiting one of the two Jupiter-like planets already known. The newly discovered terrestrial-like planet is depicted in the insert. Gliese 876 lies only 15 light-years away and is visible with binoculars toward the constellation of Aquarius.