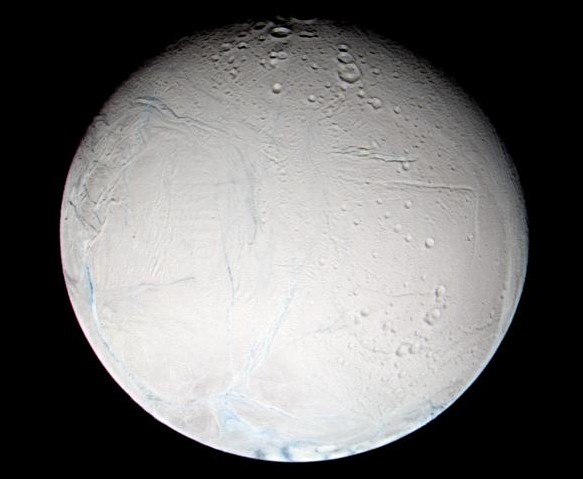 Explanation: Small, icy, inner moon of Saturn, Enceladus is only about 500 kilometers in diameter. But the distant world does reflect over 90 percent of the sunlight it receives, giving its surface about the same reflectivity as fresh snow. Seen here in a sharp view from the Cassini spacecraft's recent flyby, Enceladus shows a variety of surface features and very few impact craters - indicating that it has been an active world even though this tiny moon should have completely cooled off long ago. In fact, the resurfaced appearance of Enceladus could be the result of liquid water geysers or water volcanos. Since Enceladus orbits within the outer E ring of Saturn, the moon's surface may be kept snow-bright as it is continuously bombarded with icy ring particles. Eruptions on Enceladus itself would in turn supply material to the E ring. Interplanetary ski bums take note: tiny Enceladus has only about 1/100th the surface gravity of planet Earth and a surface temperature of -200 degrees C (-330 degrees F).