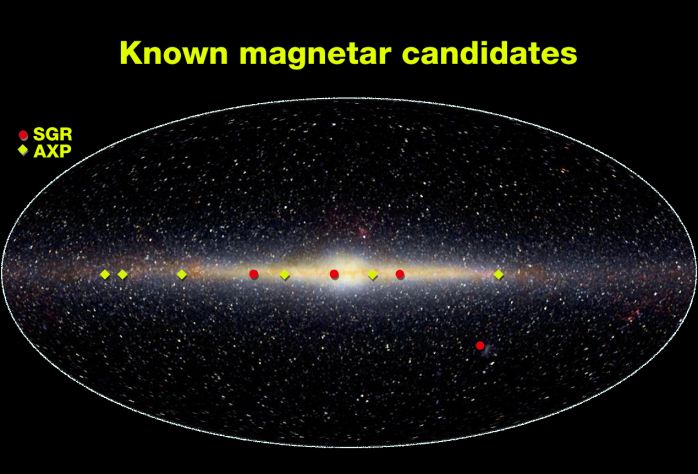 Explanation: Indicated on this infrared image of the galactic center region are positions of candidate magnetars -- believed to be the strongest magnets in the galaxy. Classified by observers as Soft Gamma Repeaters (SGRs) and Anomalous X-ray Pulsars (AXPs), these cosmic powerhouses are likely city-sized, spinning, highly-magnetized neutron stars. How strong is a magnetar's magnetic field? The Earth's magnetic field which deflects compass needles is measured to be about 1 Gauss, while the strongest fields sustainable in earthbound laboratories are about 100,000 Gauss. A magnetar's monster magnetic field is estimated to be as high as 1,000,000,000,000,000 Gauss. A magnet this strong, located at about half the distance to the Moon would easily erase your credit cards and suck pens out of your pocket. In 1998, from a distance of about 20,000 light-years, one magnetar, SGR 1900+14 generated a powerful flash of gamma-rays detected by many spacecraft. That blast of high-energy radiation is now known to have had a measurable effect on Earth's ionosphere. At the surface of the magnetar, its powerful magnetic field is thought to buckle and shift the neutron star crust generating the intense high-energy flares