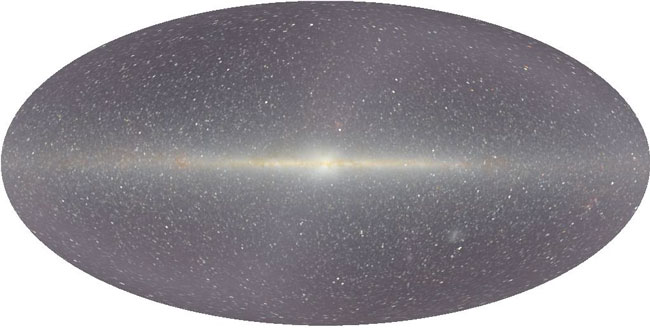 Explanation: Was this picture taken from outside our Galaxy? No, it is a composite taken from Earth orbit, well inside our Milky Way Galaxy. In light just a little too red for human eyes to see - "near infrared" electromagnetic radiation - the disk and center of our Galaxy stand out giving an appearance likely similar to seeing our Galaxy from the outside in visible light. The above COBE image was recently reprocessed for higher resolution and shows red stars and dust in our Galaxy superposed against the faint glow of many dim stars in distant galaxies. Faintly visible as an S-shaped sash running through the image center is zodiacal light -- dust in our own Solar System. Compared to the far-infrared sky, little Galactic dust is visible. The two smudges on the lower right are the Large and Small Magellanic Clouds neighboring galaxies.