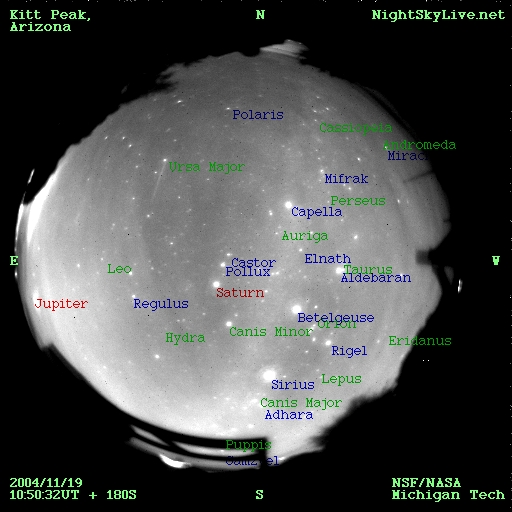 Explanation: The 2004 Leonids meteor shower had its ups and downs. Although average rates were significantly less than many previous years, as expected, at least two unexpected "mini-outbursts" of several bright meteors over a few minutes were reported. Pictured above, a bright Leonid meteor was imaged by a Night Sky Live camera over Kitt Peak National Observatory early in the morning of November 19 during one mini-outburst. The meteor appears as the streak just to the left of the green "Ursa Major" label. Moving your cursor over the image will show the image taken about 25 minutes later where two bright Leonid meteors from a second mini-outburst were recorded, visible on the lower right just to the left of the green words "Canis" and "Minor". The stars appear to shift between the two images because of the rotation of the Earth. The Night Sky Live frames show fisheye images, capturing the entire sky as a person would see it looking straight up, including peripheral vision. In mid-December, the Geminids meteor shower will give sky enthusiasts another good chance to see live meteors.