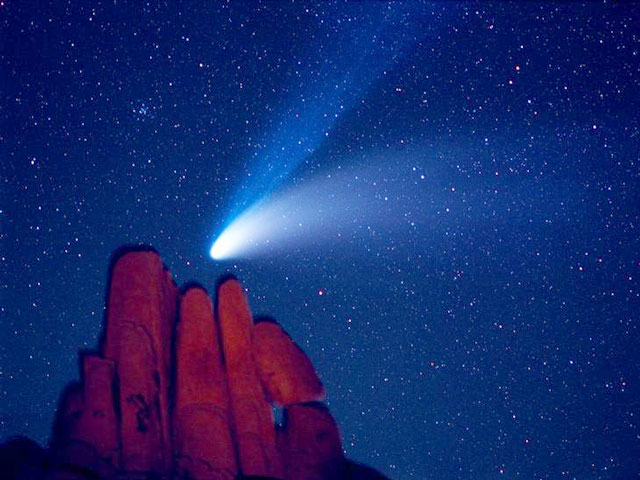 Explanation: Comet Hale-Bopp, the Great Comet of 1997, was quite a sight. No comets of comparable brightness have graced the skies of Earth since then. During this next month, however, even besides the fleeting Comet Bradfield, two comets have a slight chance of rivaling Hale-Bopp and a good chance of putting on a memorable sky show. Unfortunately, most of the show will be confined to sky gazers in Earth's southern hemisphere. Both comets are already visible to the unaided eye from there. The first, Comet C/2002 T7 (LINEAR), should be at its best before dawn during the first weeks of May from the south. The second, Comet C/2001 Q4 (NEAT), should be visible in early May from all over the Earth. Both comets appear to be approaching the inner Solar System for the first time and so it is very hard to predict how bright each will become. In the above photograph taken 1997 April 6, Comet Hale-Bopp was imaged from the Indian Cove Campground in the Joshua Tree National Forest in California, USA. A flashlight was used to momentarily illuminate foreground rocks during this six minute exposure.