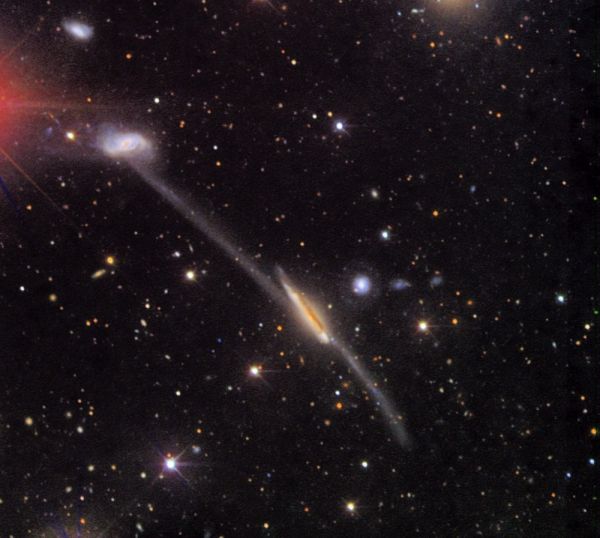 Explanation: A spectacular bridge of stars and gas stretches for nearly 250,000 light-years and joins this famous peculiar pair of galaxies cataloged as Arp 295. The cosmic bridge between the galaxies and the long tail extending below and right of picture center are strong evidence that these two immense star systems have passed close to each other in the past, allowing violent tides induced by mutual gravity to create the eye-catching plumes of stellar material. While such interactions are drawn out over billions of years, repeated close passages should ultimately result in the merger of this pair of galaxies into a larger single galaxy of stars. Although this scenario does look peculiar, galactic mergers are thought to be common, with Arp 295 representing an early stage of this inevitable process. The Arp 295 pair are the largest of a loose grouping of galaxies about 270 million light-years distant toward the constellation Aquarius. This deep color image of the region was recorded in September using the USNO 1 meter telescope near Flagstaff, Arizona.