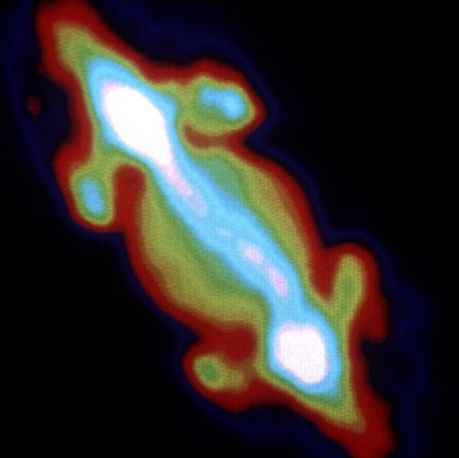 Explanation: This view of gas giant Jupiter, made from data recorded at the Very Large Array radio observatory near Socorro, New Mexico, may not look too familiar. In fact, there is no sign of a bright, round planet striped with cloud bands, sporting a Great Red Spot. Instead, the radio waves mapped in this false-color image are produced by energetic electrons trapped within Jupiter's intense magnetic field. The radio emitting region extends far beyond Jupiter's cloud tops, to over twice the visible radius of the planet, and surrounds Jupiter like an oversized version of Earth's Van Allen radiation belt. While it glows strongly at radio wavelengths, Jupiter's radiation belt is invisible in the more familiar optical and infrared views which show the Jovian cloud tops and atmospheric features in reflected sunlight.