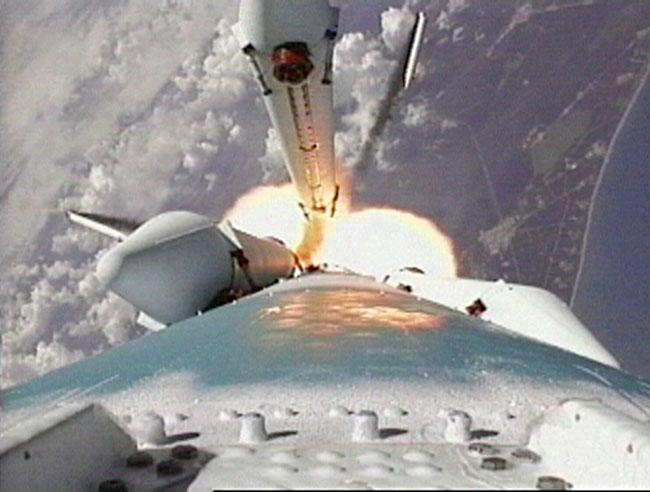 Explanation: Next stop: Mars. Last month the first of two missions to Mars was launched from Cape Canaveral, Florida, USA above a Boeing Delta II rocket. Pictured above, solid fuel boosters are seen falling away as light from residual exhaust is reflected by the soaring rocket. The Mars Exploration Rover dubbed Spirit is expected to arrive at the red planet this coming January. Upon arriving, parachutes will deploy to slow the spacecraft and surrounding airbags will inflate. The balloon-like package will then bounce around the surface a dozen times or more before coming to a stop. The airbags will then deflate, the spacecraft will right itself, and the Spirit rover will prepare to roll onto Mars. The robotic Spirit is expected to cover as much as 40 meters per day, much more than Sojourner, its 1997 predecessor. Spirit will search for evidence of ancient Martian water, from which implications might be drawn about the possibility of ancient Martian life. A second rover named Opportunity was successfully launched on July 7 and will arrive at Mars a few weeks later.