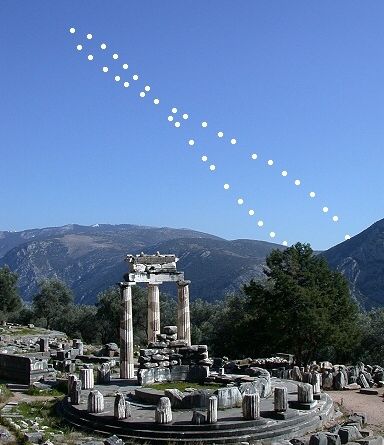 Explanation: Astronomically speaking, at the Equinox on March 21, 0100 UT (March 20, 8:00 PM ET) the season changes. For this Equinox the Sun rises due east as it crosses the celestial equator heading north. In celebration, consider this spectacular sunrise analemma! An analemma is the figure-8 loop you get when you mark the position of the Sun at the same time each day throughout the year. In this remarkable case, 38 separate exposures (and 1 foreground exposure) were recorded on a single piece of film between January 12 and December 21, 2002 at 0600 UT. The tilt of planet Earth's axis and the variation in speed as it moves around its elliptical orbit combine to produce the predictable analemma curve. The top and bottom of the figure-8 correspond to the Solstices -- the Northern and Southern limits of the Sun's sky motion. The two Equinoxes find the Sun at points along the anelemma curve exactly half way between the Solstices. Here, the analemma's Southern portion is partly hidden by mountains. In the foreground lie the stone ruins of the Tholos at the ancient site of Delphi, Greece.