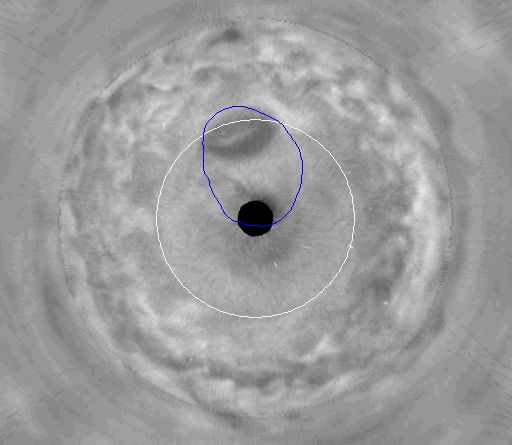 Explanation: Seventeenth century astronomer Giovanni Domenico Cassini was an astute observer of Jupiter's Great Red Spot. So it seems only fitting that his namesake, the Cassini spacecraft, has enabled detailed observations of another planet-sized blemish -- Jupiter's Great Dark Spot. Unlike the Red Spot, the Great Dark Spot lies near Jupiter's north pole and seems to appear and disappear over periods of months rather than persisting for hundreds of years. Seen at ultraviolet wavelengths, the dark feature resides in the Jovian stratosphere confined by pole-encircling winds, analogous to planet Earth's antarctic ozone hole. This image of the Dark Spot is a single frame from a movie created with data recorded during the spacecraft's year 2000 flyby of Jupiter. Projected to show Jupiter's north polar region, no data are available for the blank central area, while the Great Dark Spot lies above and just left of center. The white circle marks 60 degrees latitude and the blue contour outlines a persistent Jovian auroral zone which may be related to the formation of the Great Dark Spot.