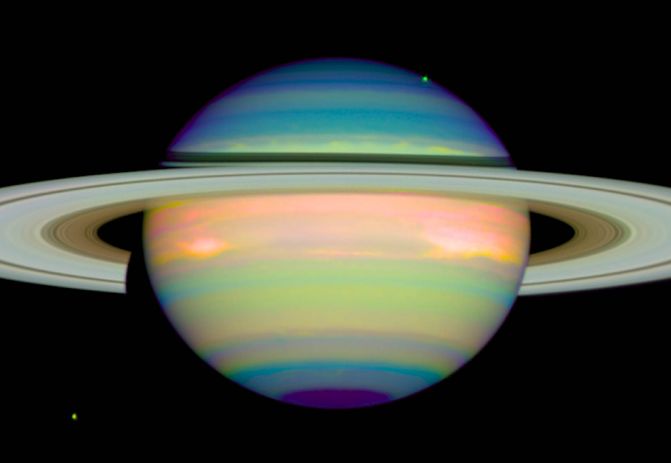 Explanation: This delightfully detailed false-color image of Saturn was taken in January 1998 by the orbiting Hubble Space Telescope. The picture is a combination of three images from Hubble's NICMOS instrument and shows the lovely ringed planet in reflected infrared sunlight. Different colors indicated varying heights and compositions of cloud layers generally thought to consist of ammonia ice crystals. The eye-catching rings cast a shadow on Saturn's upper hemisphere. The bright stripe seen within the left portion of the shadow is infrared sunlight streaming through the large gap in the rings known as the Cassini Division. Two of Saturn's many moons have also put in an appearance, Tethys just beyond the planet's disk at the upper right, and Dione at the lower left. Presently, Saturn shines brightly in evening skies as a pale yellow "star" near the constellation Orion.