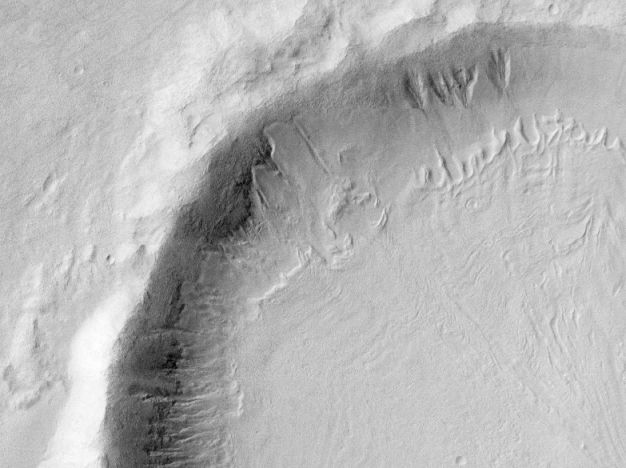 Explanation: Tantalizing images of gullies on Mars have offered striking evidence for recent flows of liquid water. But Mars is too cold and its atmosphere too thin for liquid water to exist on the surface. Still a new and compelling explanation for gullies carved by liquid water was inspired by this recently released image from the Mars Odyssey spacecraft. Pictured is a section of what is likely a snow covered crater in the Martian southern hemisphere. North is at the top and the scene, illuminated from the left, is about 16 kilometers wide. Patches of smooth snow pack remain along the northern crater wall, while structures resembling the famous Martian gullies appear to be emerging as the snow cover gradually disappears, and are exposed along the crater's western (left) wall. Melting snow, running underneath the snow pack and down the crater walls would be protected from the extreme surface conditions, remaining liquid and eroding the gullies over time. Could life exist in a liquid water environment beneath the Martian snow?