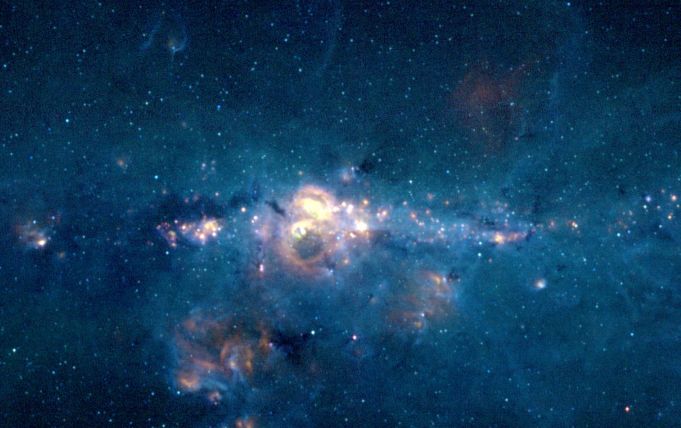 Journey to the Center of the Galaxy
Credit: MSX, IPAC, NASA

Explanation: In Jules Verne's science fiction classic A Journey to the Center of the Earth, Professor Hardwigg and his fellow explorers encounter many strange and exciting wonders. What wonders lie at the center of our Galaxy? Astronomers know of some of the bizarre objects which exist there, like vast cosmic dust clouds, bright star clusters, swirling rings of gas, and even a supermassive black hole. Much of the Galactic Center is shielded from our view in visible light by the intervening dust and gas, but it can be explored using other forms of electromagnetic radiation. This haunting wide angle image of the Galactic Center region in infrared light was constructed using data from the Midcourse Space Experiment (MSX) satellite. The image maps three mid-infrared bands, otherwise invisible to human eyes, into visible blue, green, and red colors revealing the thermal emission from dust clouds near the galactic center that have been heated by starlight. The galactic plane runs along the middle of this image while the galactic center itself is the bright spot at picture center. The field of view of this cropped picture is about 1.5 by 2.5 degrees.