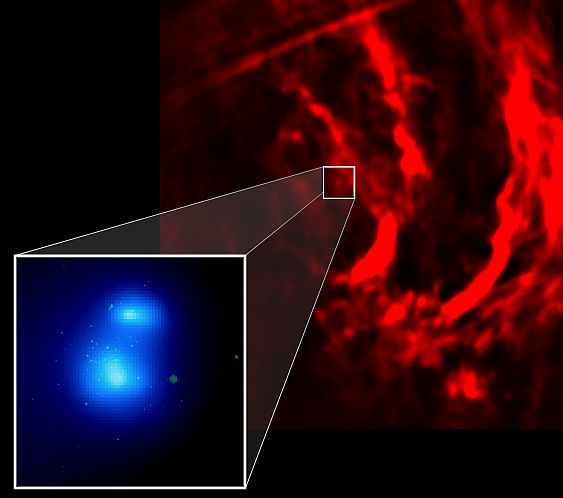 Explanation: The most compact cluster of stars known in our galaxy, the Arches cluster, boasts 100 or so massive, young stars contained within a diameter of one light-year. Seen toward the constellation Sagittarius, the Arches cluster is about 25,000 light-years from planet Earth and lies within a scant 100 light-years of the supermassive black hole believed to lurk in our Milky Way Galaxy's center. This combination of images in radio, infrared, and x-ray light illustrates this star cluster's bizarre galactic neighborhood. Shown in red, radio emission traces the filamentary arching structures near the galactic center around the Arches cluster location. Within the zoomed inset box, infrared image data shows some of the cluster's individual stars as bright point-like sources. The diffuse emission in blue surrounding the cluster stars is a false-color x-ray image of an enveloping cloud of 60 million degree gas -- the first time such an energetic star cluster halo has been detected. Astronomers consider the tightly packed and relatively nearby Arches cluster, an analog of the furious star forming regions in galaxies millions of light-years away.