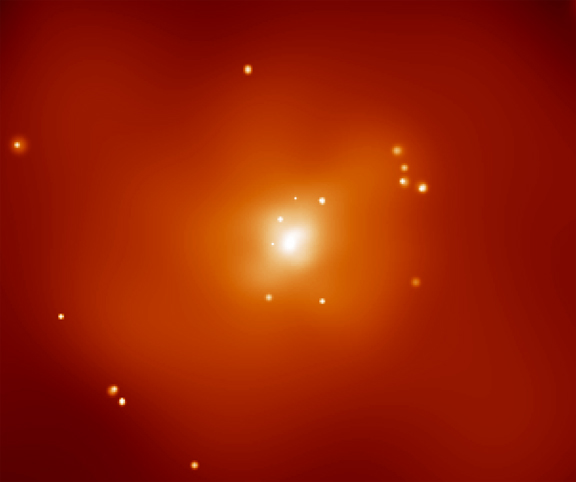 Explanation: Elliptical galaxy NGC 720 is enveloped in a cosmic cloud of x-ray emitting gas. Seen in this false color image from the Chandra X-ray Observatory, the extreme temperature of the gas - about 7 million degrees Celsius - makes it impossible to confine the cloud to the vicinity of NGC 720 based on the gravity of this galaxy's visible stars alone. In fact, the x-ray cloud is taken as solid evidence for the presence of dark matter surrounding NGC 720 -- unseen material which has gravitational influence that can keep the x-ray hot gas cloud from escaping. Chandra's remarkable vision clearly distinguishes the bright point-like x-ray sources from the diffuse cloud. Astronomers can then use the detailed shape of the cloud to infer the distribution of dark matter in NGC 720 and even test theories about the fundamental nature of dark matter. According to modern understanding, the mysterious dark matter, whatever it is, is by far the most common form of matter in the Universe. Galaxy NGC 720 lies about 80 million light-years distant toward the constellation Cetus.