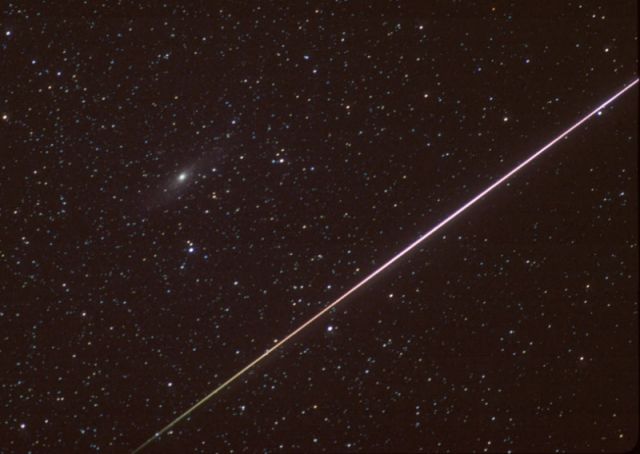 Explanation: On August 13, while counting Perseid meteors under dark, early morning Arizona skies, Rick Scott set out to photograph their fleeting but fiery trails. The equipment he used included a telephoto lens and fast color film. After 21 pictures he'd caught only two meteors, but luckily this was one of them. Tracking the sky, his ten minute long exposure shows a field of many stars in our own Milky Way galaxy, most too faint to be seen by the unaided eye. Flashing from lower left to upper right, the bright meteor would have been an easy eyeful though, as friction with Earth's atmosphere vaporized the hurtling grain of cosmic sand, a piece of dust from Comet Swift-Tuttle. Just above and left of center, well beyond the stars of the Milky Way, lies the island universe known as M31 or the Andromeda galaxy. The visible meteor trail begins about 100 kilometers above Earth's surface, one of the closest celestial objects seen in the sky. In contrast, Andromeda, about 2 million light-years away, is the most distant object easily visible to the naked-eye.