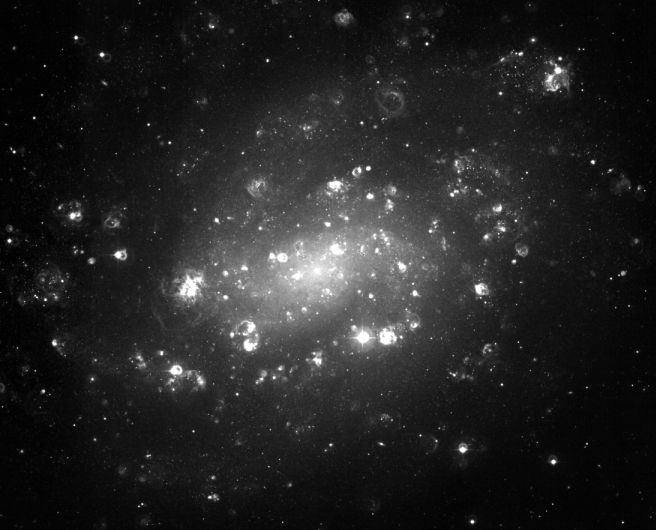 Explanation: Featured in color in yesterday's episode, big, beautiful, face-on spiral galaxy NGC 300 is seen here through a narrow filter that transmits only the red light of hydrogen atoms. Ionized by energetic starlight, a hydrogen atom emits the characteristic red H-alpha light as its single electron is recaptured and transitions to lower energy states. As a result, this image of NGC 300 is dominated by regions filled with massive, young stars and shell-shaped clouds of hydrogen gas hundreds to thousands of light-years across. Formed in groups called OB associations, the stars are likely only a few million years young. The hydrogen clouds are glowing nebulae or HII regions that have been sculpted by the strong stellar winds and ultraviolet radiation. While picking out your favorite cosmic shell in this picture, don't be misled by the relatively bright foreground stars located in our own Milky Way galaxy. They often show spikes and rings caused by the telescope and camera system.