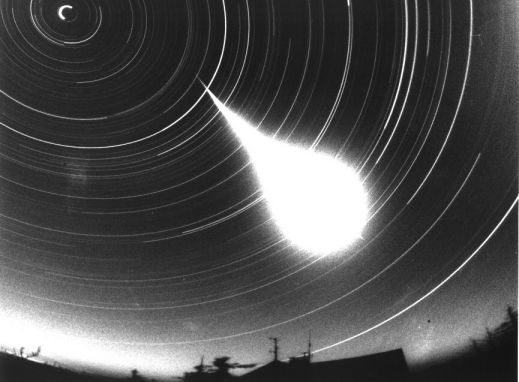 Explanation: This exceptionally bright fireball meteor trail was photographed with a fish-eye camera at a Czech Republic station of the European Fireball Network on January 21, 1999. Of the star trails visible in this night-long exposure, the bright short arc in the upper left is due to Polaris, the north star. The breaks seen near the beginning of the fireball trail itself were produced by a shutter rotating 15 times a second. In all, three stations recorded the dazzling streak and their combined tracking information has revealed details of the meteor's brief atmospheric flight and previous interplanetary voyage. For example, the luminous trail is measured to begin at an altitude of 81.9 kilometers and covered 71.1 kilometers in 6.7 seconds. The projected prior orbit for the meteoroid corresponds to one typical for Apollo class asteroids which can cross Earth's orbit. In forty years of operations the European Network has multistation recordings of less than 10 or so fireballs as bright as this one. It is thought likely that a small (a few hundred grams) meteorite survived this fiery fall to Earth and landed near the Czech-Poland border.