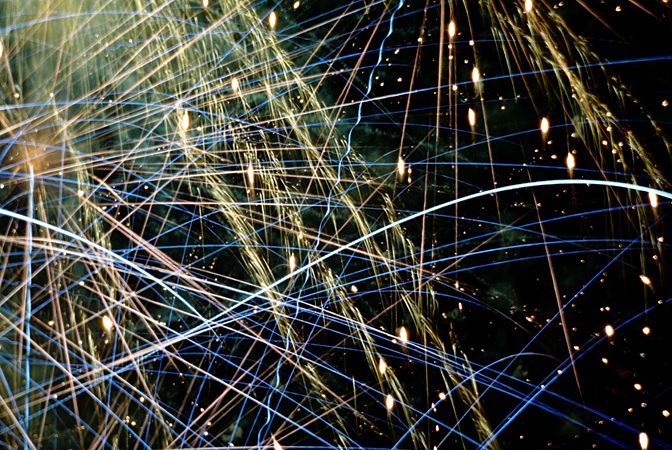 Explanation: Experimenting with a new telescope and camera, photographer Jim Steele captured this surreal but festive image of fireworks in the night sky above Ashland, Oregon. The date was July 4th and the fiery streaks were part of the traditional annual celebration of independence day in the United States. Fiery streaks from another annual event will revisit dark skies this weekend, as shooting stars arc through the night during the much anticipated Perseid Meteor Shower. Perseid meteors are actually bits of dust from the periodic Comet Swift-Tuttle and once each year planet Earth orbits through Swift-Tuttle's cometary dust stream. As the comet dust enters Earth's atmosphere traveling at tens of kilometers per second, the particles are vaporized leaving bright and sometimes colorful trails. While Perseid meteors can be viewed over the next few nights, this year's shower is expected to peak on August 12 and 13 with a rate of dozens or more meteors per hour visible in moonless early morning skies.