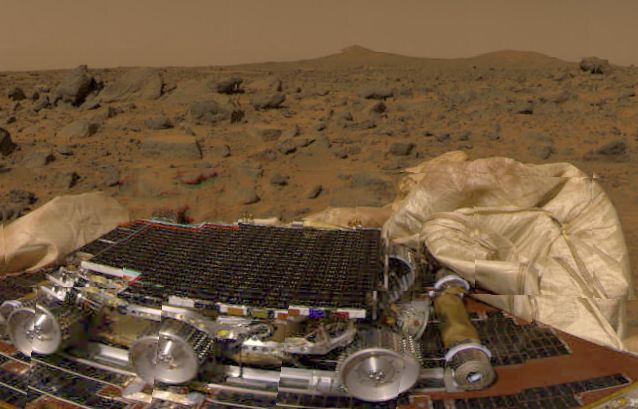 Explanation: On July 4th, 1997 - using its own array of fireworks, a parachute, and airbags - the Mars Pathfinder spacecraft successfully came to rest on the surface of Mars at 10:07 AM Pacific Daylight Time. Ninety minutes before reaching the surface Pathfinder began a flurry of activity. The robot spacecraft vented cooling fluid, jettisoned its cruise stage, decelerated at 20 gees on atmospheric entry, deployed a 24 foot parachute, jettisoned its heat shield, slid down a 60 foot bridle, fired solid fuel braking rockets, deployed a cocoon of airbags, separated from the bridle, impacted the martian surface, bounced a few times (traveling about 300 - 600 feet between bounces), settled on the surface, deflated the airbags, and righted itself, all under the autonomous control of the onboard computer. Above is a mosaic of images transmitted shortly after Pathfinder reestablished communication with its operators on Earth. The solar powered, two foot long, 25 pound Mars Sojourner robot rover is visible crouched on the unfolded spacecraft. Beyond lie deflated airbags, rock-strewn terrain, distant hills, and a dusty brown martian sky.