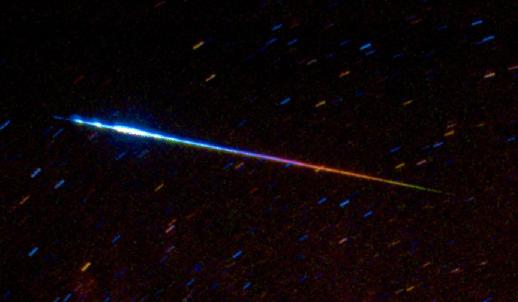 Explanation: This weekend, the annual Perseid Meteor Shower reaches its maximum. Grains of cosmic sand and gravel shed from Comet Swift-Tuttle will streak across the sky as they vaporize during entry into Earth's atmosphere. The Perseids result from the yearly crossing of the Earth through Comet Swift-Tuttle's orbit. The Perseids are typically the most active meteor shower of the year. In a clear dark sky, an observer might see a meteor a minute near peak times, but this year a bright moon will overwhelm the glow from many perseid meteors until moonset in the early morning hours. Pictured above is a Perseid meteor from 1993. The colors are representative but digitally enhanced. As the meteor streaked across the night sky, different excited atoms emitted different colors of light. The origin of the green tinge visible at the right is currently unknown, however, and might result from oxygen in Earth's atmosphere. Perseid meteors can best be seen from a relaxing position, away from lights, just before the dawn twilight.