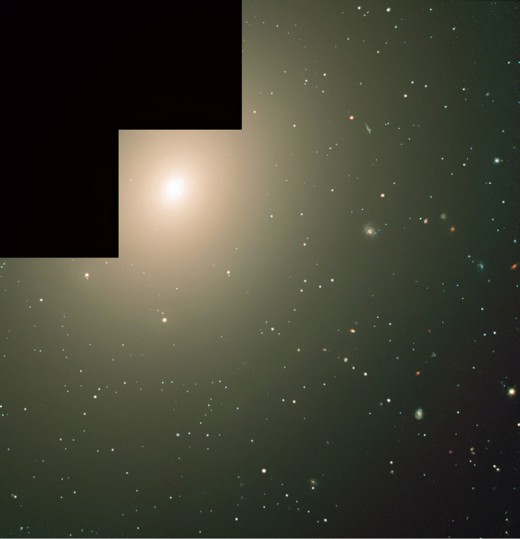 Explanation: Elliptical galaxy NGC 4365 is old, probably about 12 billion years old. Like most elliptical galaxies, this galaxy was thought to be full of old stars too, its burst of star forming activity having long since ended. But combining data from the Hubble Space Telescope and the European Southern Observatory's ground-based Antu Telescope, a team of European and US astronomers discovered NGC 4365's surprising secret -- some of its star clusters are young. In this composite image, the galaxy's bright nucleus is at the upper left. NGC 4365's star clusters themselves appear as bright dots against a diffuse glow of unresolved starlight and fuzzy, distant background galaxies. The notched border outlines Hubble's WFPC2 camera field. Moving the cursor over the image identifies individual star clusters, with the relatively young (few billion year-old) clusters circled in blue, and the anticipated 12 billion year-old clusters circled in red. NGC 4365 is 60 million light-years away in the Virgo galaxy cluster.