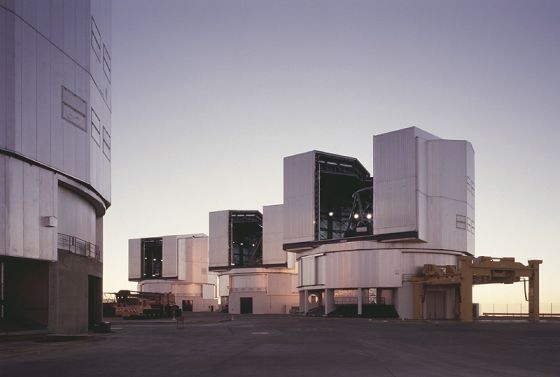 Explanation: From left to right are the enclosures of Yepun (ye-poon; Sirius), Antu (an-too; Sun), Kueyen (qua-yen; Moon), and Melipal (me-li-pal; Southern Cross), pictured here as night falls at Paranal Observatory in northern Chile. These are the four 8.2 meter wide telescope units of the European Southern Observatory's Very Large Telescope (VLT). ESO astronomers and engineers plan to combine the light of the individual units, achieving an equivalent aperture of 16.4 meters which will, for a while, constitue the biggest telescope on planet Earth. Of course, the individual telescopes also function independently. Antu, Kueyen, and Melipal have already achieved first light with Yepun expected to operate in 2001. The telescope names come from the Mapuche language. They were unanimously chosen based on the winning "name-the-telescopes" essay by 17-year old Jorssy Albanez Castilla from Chuquicamata near the city of Calama.