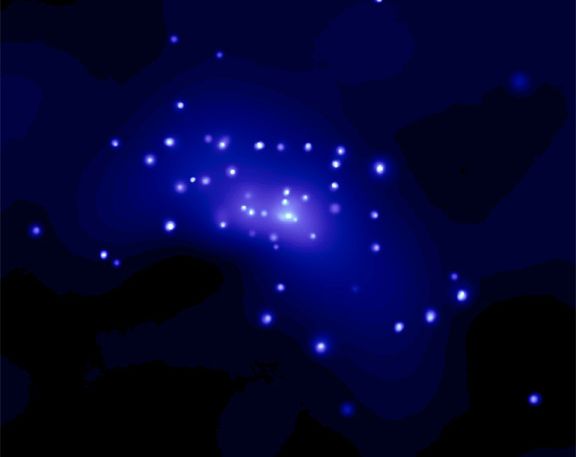 Explanation: The many bright, point-like sources in this Chandra Observatory x-ray image lie within NGC 4697, an elliptical galaxy some 40 million light-years away towards Virgo. Like other normal elliptical galaxies, NGC 4697 is a spherical ensemble of mainly older, fainter, low mass stars, with little star forming gas and dust compared to spiral galaxies. But the luminous x-ray sources in the Chandra image indicate that NGC 4697 had a wilder youth. Powering the x-ray sources are neutron stars and black holes in binary star systems, where x-rays are generated as matter from a more ordinary companion star falls in to these bizarre, compact objects. Since neutron stars and black holes are the endpoints in the lives of massive stars, NGC 4697 must have had many bright, massive stars in its past. An exceptionally large number of NGC 4697's x-ray binaries are found in the galaxy's globular star clusters, suggesting that dense star clusters are a good place for neutron stars and black holes to capture a companion. Stellar winds and supernovae explosions of massive stars could also have produced the hot gas responsible for this galaxy's diffuse x-ray glow.