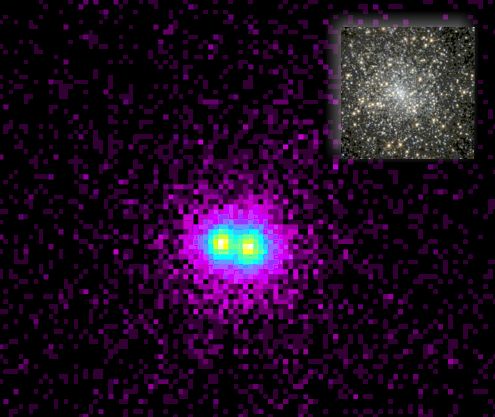 Explanation: Side by side, two x-ray stars greeted astronomers in this false-color Chandra Observatory x-ray image of a region near the core of globular star cluster M15. The greeting was a pleasant surprise, as all previous x-ray images of the cluster showed only one such source where Chandra's sharper x-ray vision now reveals two. These x-ray sources are modeled as neutron star binary systems. Each is a city-sized neutron star in close orbit with a normal stellar companion. X-rays are generated as matter from the normal star falls onto the compact neutron star. This break through explains why observations of the previously recognized lone neutron star binary system in M15 were difficult to reconcile with any single model. It also suggests that other globular star clusters which roam the halo of our Milky Way galaxy and seem to contain only one such neutron star x-ray source may in fact contain more. An optical Hubble Space Telescope image of the dense M15 cluster is inset at the upper right.