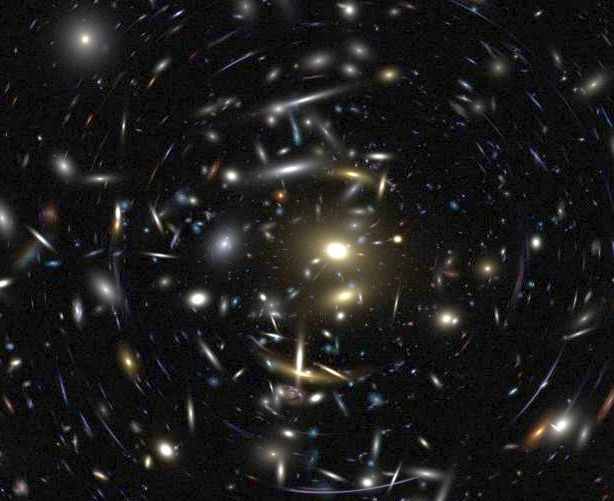 Explanation: Stunningly detailed, this picture is a computer simulated view of a cluster of galaxies in the distant cosmos. A large, elliptical galaxy dominates this hypothetical cluster's central region surrounded by a swarm of member galaxies. Other galaxies which lie far behind the cluster are seen as numerous visible concentric arcs - lensed by the enormous gravitational field dominated by dark matter within the cluster itself. Such magnificent images are expected to be achieved by the Advanced Camera for Surveys (ACS), one of the upgrades being installed on the Hubble Space Telescope during the ongoing servicing mission. Compared to Hubble's workhorse Wide Field Planetary Camera 2 (WFPC2), whose achievements include the current deep field views of the Universe, the new technology ACS will be twice as sharp an imager with twice the field of view and five times the sensitivity. Along with extended views of the distant cosmos, enthusiastic astronomers also plan to use the ACS to monitor our own Solar System and to search for planets orbiting stars beyond the Sun.