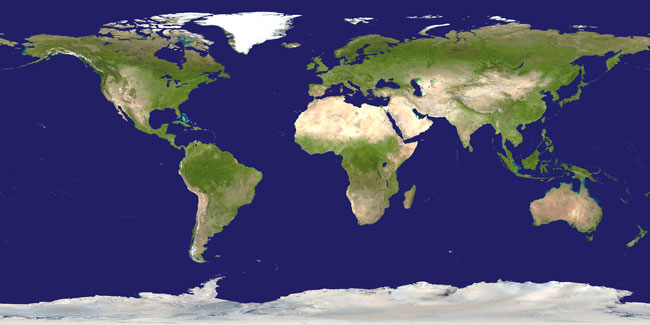 Explanation: Here are the true colors of planet Earth. Blue oceans dominate our world, while areas of green forest, brown mountains, tan desert, and white ice are also prominent. Oceans appear blue not only because water itself is blue but also because seawater frequently scatters light from a blue sky. Forests appear green because they contain chlorophyll, a pigment that preferentially absorbs red light. The above image is a composite generated predominantly with data from Moderate Resolution Imaging Spectroradiometer (MODIS), an instrument mounted on the Terra satellite that has orbited Earth since 1999 December. Sub-areas were imaged only when experiencing cloud-free daylight when it occurred from June through September 2001. The Earth looks much different at night.