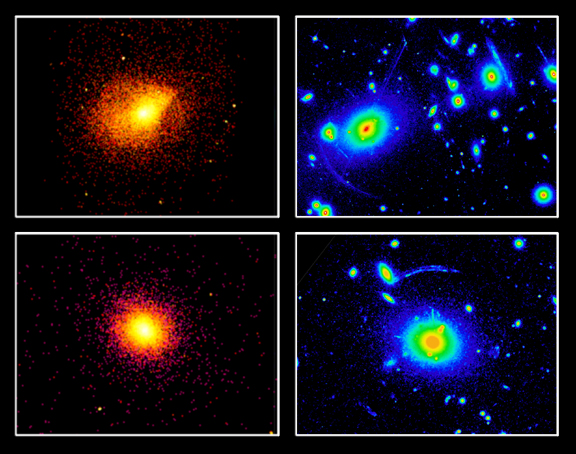 Explanation: Situated over 2,000,000,000 (two billion) light-years from Earth, galaxies in cluster Abell 2390 (top) and MS2137.3-2353 (bottom) are seen in the right hand panels above, false-color images from the Hubble Space Telescope. Corresponding panels on the left reveal each cluster's x-ray appearance in images from the Chandra X-ray Observatory. While the Hubble images record the cluster's star-filled galaxies, the x-ray images show no galaxies at all ... only multi-million degree hot intracluster gas which glows in high energy x-rays. But there lies a profound mystery. The total mass in the galaxies on the right, plus the mass of the hot gas on the left, falls far short of providing enough gravity to confine the hot gas within the galaxy clusters. In fact, the best accounting to date can only find 13 per cent (!) of the total matter necessary. Gravitational lens arcs visible in the deep Hubble images also indicate these clusters have much more mass than directly identifiable in the Chandra and Hubble data. Astronomers conclude that most of the cluster matter is dark matter, invisible even to the combined far-seeing eyes of these orbiting astrophysical observatories. What is the nature of this cosmic dark matter?