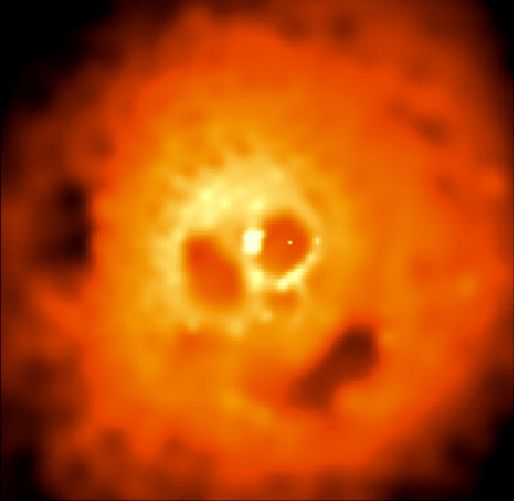 Explanation: This haunting image from the orbiting Chandra Observatory reveals the Perseus Cluster of Galaxies in x-rays, photons with a thousand or more times the energy of visible light. Three hundred twenty million light-years distant, the Perseus Cluster contains thousands of galaxies, but none of them are seen here. Instead of mere galaxies, a fifty million degree cloud of intracluster gas, itself more massive than all the cluster's galaxies combined, dominates the x-ray view. From this angle, voids and bright knots in the x-ray hot gas cloud lend it a very suggestive appearance. Like eyes in a skull, two dark bubbles flank a bright central source of x-ray emission. A third elongated bubble (at about 5 o'clock) forms a toothless mouth. The bright x-ray source is likely a supermassive black hole at the cluster center with the bubbles blown by explosions of energetic particles ejected from the black hole and expanding into the immense gas cloud. Fittingly, the dark spot forming the skull's "nose" is an x-ray shadow ... the shadow of a large galaxy inexorably falling into the cluster center. Over a hundred thousand light-years across, the Perseus Cluster's x-ray skull is a bit larger than skulls you may see tonight. Have a safe and happy Halloween!